On the latest installment of The Ave Podcast, it’s the Twitter Spaces remix of the annual Super Bowl Postgame episode. We break down everything from Super Bowl 56. From Aaron Donald’s performance; the clutchness of Cooper Kupp; the Stafford-Kupp connect; the confusing play-calling of Bengals HC Zac Taylor; the new “Chips All-In” era of football; the legendary L.A.-infused Halftime performance; and everything else in-between.

*** Thanks for tuning in, and don’t forget to rate, review, and subscribe to the podcast and the blog below. The podcasts are available for download. You can check out South Shore Ave on Apple Podcasts, Google Play, Stitcher, Spotify, TuneIn and Alexa, the South Shore Ave YouTube Channel, as well as wherever else you listen to podcasts. *** 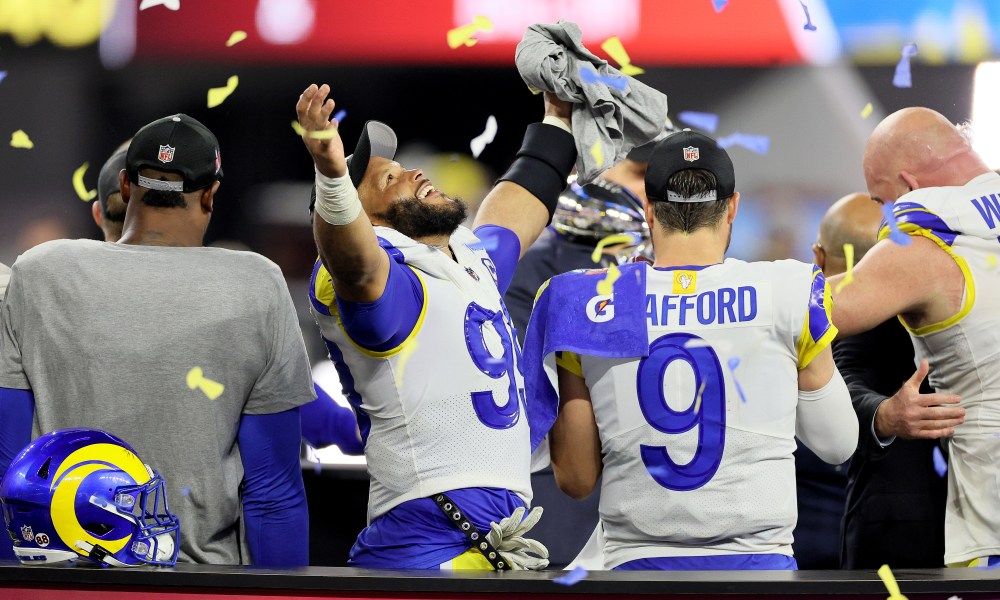 The Ave Podcast with Cal Cee. Episode 57: The Greatest Two Weeks In Hip Hop. Ever.

Today on The Ave Podcast, we take you back down memory lane to discuss the greatest two week stretch in Hip Hop history. On Nov. 9, 1993, two iconic albums were released on the same day, A Tribe Called Quest’s 3rd album Midnight Marauders, and Wu-Tang Clan’s debut album Enter The Wu-Tang: 36 Chambers. Both albums went on help usher in a new era, and became two of the most influential bodies of work in the genre. If that wasn’t enough, exactly two weeks later Snoop Doggy Dogg released his debut album Doggystyle, which followed the same path as the two albums before it, and launched Snoop into superstardom.

I invite DJ Chris Nice (Grooves & Rhythms Mixshow, Fridays from 2 – 4PM on MyLime Radio) & Dennis Barham (Actor) as we discuss these three albums, the peak of Hip Hop’s Golden Era, how the ’93-’94 stretch may have represented the best 2-year period that ever existed in the genre, plus a ton more. Please enjoy.

*** Thanks for tuning in, and don’t forget to subscribe to the podcast and the blog below, and also, the podcasts are now available for download. You can now check out the podcasts on Apple Podcasts, Google Play, Stitcher, and Spotify. You can get to all of those apps on your IOS or Android devices. ***

To subscribe to South Shore Ave, click onto the Follow button, and enter your email address, or click onto the RSS Feed. Very special thanks to DJ Chris Nice & Dennis Barham for their guest appearance on this podcast.

We here at South Shore Ave are gassing up the DeLorean & taking you back through to the musical Golden Era of 90’s music to celebrate the 20th Anniversary of the Greatest Time in Hip Hop history. Back in November 1993, three iconic albums were released within a span of fourteen days that forever changed the landscape of hip hop music. A Tribe Called Quest’s 3rd album, Midnight Marauders & Wu-Tang Clan’s debut release Enter Da Wu Tang (36 Chambers) were both released on Nov 9th to massive fanfare & acclaim. Two weeks later, they were both bested sales-wise by the release of Doggystyle, Snoop Dogg’s debut album off of Death Row Records that turned Snoop into a full-fledged mega superstar. Today on The Baseline Blog, we wrap up the final segment of this 3-part blog series the day before the 20th Anniversary of Snoop’s solo debut by asking some questions about the classic LP.

Yeah. I went there. Why not? Is this not debatable? Have you not listened to the this album? Oh boy, I’m getting the sense I’m getting a lot of dirty looks & teeth-sucking here so I’ll say my piece quick. Here’s a list of some of the greatest albums to come out of the left coast….

2Pac – All Eyez On Me, 2Pacalypse Now

One thing to notice, Dr. Dre has his hands in FIVE albums here. I mean, wow. NWA’s album is foundational, Ice Cube’s album set a standard, 2Pac’s album was trendsetting & revengeful, & The Chronic is the most important to come out of the West Coast, so for that, I’ll also say that for this reason, it makes it the best album ever. Not just that it’s widely considered the best hip hop album ever made, but Snoop rode shotgun for most of it. I will say that in retrospect, listening to these albums now (not including Young MC of course), Doggystyle comes a close second, & I mean close. Let’s look at this album another way….

I say yes, & it’s all praise to Dr. Dre on this one. When he has cart blanche to do what he wants on an album, not only do they sound great & become classics (or at least flirt with the line), it sounds cinematic. He’s like Steven Spielberg behind the boards. When you listen to all the albums he’s worked on from The Chronic, to this album, to even 50 Cent’s “Get Rich or Die Trying” & The Game’s “The Documentary” , they all have the same feel, like a larger than life sound to them. They’re like movies, & not in the same way that DJ Khaled says it & makes you roll your eyes. You listen to the albums, & you can almost visualize everything you’re hearing on the spot. I wish I knew how he does it, but it’s an incredible tool that he’s long mastered. Bringing it back to Doggystyle, I honestly believe this is his best all around work production-wise from top to bottom. Match this up with Snoop’s talents & his skyrocketing star power at the time, & you have a groundbreaking masterpiece. Just know there are no holes in this album. Even the “fillers” could have been released as singles. Just because I say that, it doesn’t mean I think it’s the best album ever, but it definitely belongs in the top 10. At least in my eyes.

If branded properly & packaged on satellite radio, would WBALLZ work?

Maybe, but they would only be available after 11pm. I mean, where else would you be able to have on-air radio personalities named DJ Suck T Nuts & DJ EZ Dick? Ok, maybe Shade 45. Even with that, they would probably have to be called DJ STN & DJ EZ if they wanted to be on air when the sun is out. FCC sanctioned or not.

What songs off this album are the most club relevant in 2013?

The first released song off of this album. Love the Blaxploitation-style intro before the beat rolls in. Classic, classic song in every sense even though you don’t normally hear it as much as you should. Lyrics were on point, the record at the time had that “Get ready, I’m about to take over right now” vibe to it. And the video? Part slapstick, part “Check The Rhime” that ends off with a big party and has a girl grinding her ass on top of the dude’s bald head (fast forward to the 3:47 mark). Ok, the video may not have made the video as huge looking back now, but trust me, the song was huge.

This song has my favorite lyric off of this whole album.

Production wise, this is the cleanest, smoothest record on here. I have to say again, Dr. Dre & that Death Row team were really in their prime back then. If there were awards given out that year, Snoop would have won rookie of the year, made the all-star team, won the regular season & finals MVP off this one album alone…. & this would have been one of the signature games everyone would have been talking about. Just a phenomenal record.

“When I met you last night, baby/Before you opened up your gap/I had respect for you lady/But now I take it all back….”

You already singing along right? Should I continue? Ok, what the hell…..

I hope Moms ain’t reading this right now. In fact, anyone who knows my Moms, don’t…..just…just don’t even show her this post. Yes, I do realize that I’m a grown ass man.

You feel guilty that you’ve been reading this out, feeling remorse over these lyrics, but yet still can’t stop singing this? & ladies, don’t even lie to yourselves right now, you know you sing this louder than a lot of men do when this comes on. Since we’re here, we may as well finish….

Will we ever see a time in music like this ever again?

I can’t speak for the other genres of music, but as far as Hip Hop is concerned? No way. It’s been 20 years & counting since it last happened, & with the way the landscape of music is now, it won’t happen. Take this year for example. The biggest album releases this year came from Drake (Nothing Was The Same), Jay-Z (Magna Carta Holy Grail), & Kanye West (Yeezus). But those albums came out within 3 months of each other not two weeks & outside of possibly Drake, those albums won’t define a generation much less be memorable years from now. The great thing about these albums that we’ve been discussing here, wasn’t the fact that they changed the landscape of hip hop forever, or that they remain ingrained in the Mount Rushmore of the greatest albums ever made; their sounds were all so radically different from one another. That fact is what represents the Golden Era best. Back then, there were so many artists with different musical styles & sounds, and so many of these artists put out such incredible material that a lot of it stood the test of time.

I don’t want to come off as the old guy here who hates everything new or anything like that, cuz admittedly, I’m also predisposed to pumping my arms & loudly yelling out thoughtful phrases like, “Sha-Shabba Ranks/Sha-Sha-Shabbaaarrrrrraaaaanks!” or “Ocho Cincooooo!” when the mood & the music strikes me in a club. Seriously speaking though, I root for good music, especially if it’s new. However, something is clearly missing from today’s hip hop, & anyone who grew up in this generation that read and relate to this blog series over the course of these two weeks would agree. The diversity from the artists you saw from these three albums used to be a regular thing back then. The rappers in the West Coast had their own style. The ones coming from the South drummed to their own bass line. Artists from the Midwest moved & sounded differently too. The East coast guys sounded different from themselves much less from any other region. Now in 2013, you can’t tell the difference between a rapper from Brooklyn and a rapper from Fort Lauderdale unless you googled their bios. Everyone sounds the same, style, lyrics & production. Hip Hop has become a big factory pumping out the next robot to entertain us, similar to how Hondas ship out Accords. We’ve basically become used to this now, & for the most part it is what it is. Some of us have adapted along with the new ways, some of us have left hip hop never to return, & some of us (like me) are left bewildered while we sit on the fence not knowing which way to fall anymore. It’s interesting that High Top Gumby-style cuts, skin fades, Ewing sneakers & hammer pants have come back in rotation.  It’s all good, but sometimes I wish that hip hop from my era was on the next DeLorean driving back to the future.